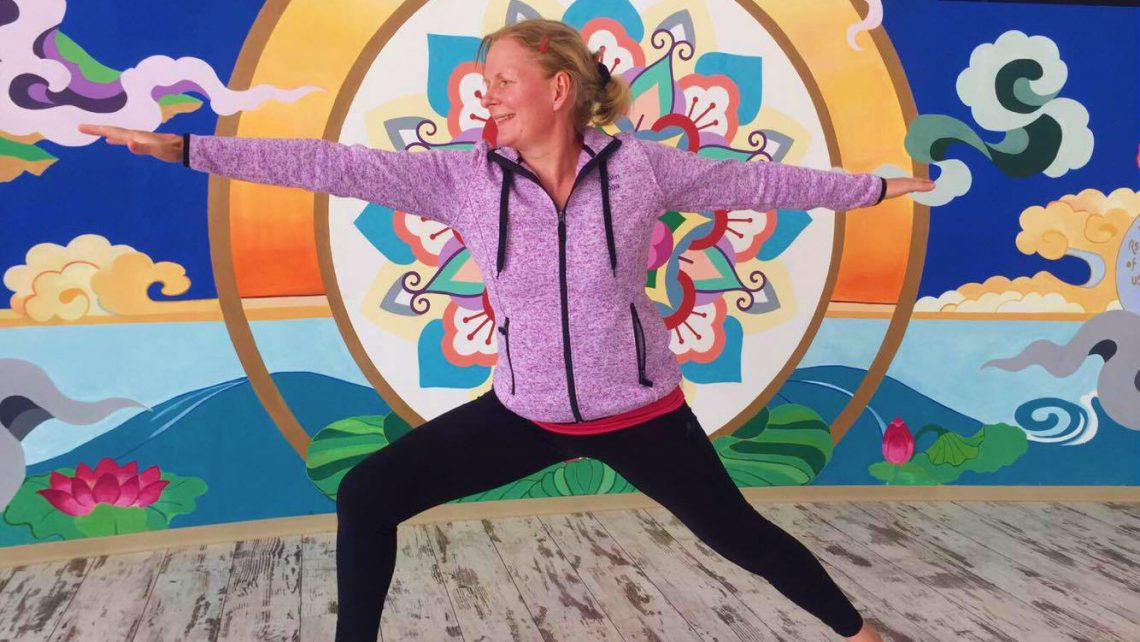 My yoga journey began in 1998 when I attended my first yoga class with Dave Brocklebank at the Burren Yoga Retreat Centre. I attended a 6-week course with my friend Yvonne O’ Grady. We were both hooked, loved it. We had good craic together in class and always felt wonderful after. Dave taught Satyananda Yoga primarily at the time and the style of yoga really appealed to me. Later I went on to practice Bikram and Ashtanga yoga.

The movement part (asanas) of yoga has never come to me naturally. My youth was spent playing camogie, soccer and football and never really stretching afterwards. In 2004, I travelled to France, outside Paris to live in an Ashram for a month to train to become a Sivananda Yoga Teacher. This was an amazing experience. We woke up every morning at 5.30am, chanted for 2 hours, practised yoga, practised karma yoga, participated in theory classes and finished in the evening with more chanting. After leaving the Ashram I never experienced such a profound level of peace. It was magical. It was as if I was moving in slow motion in comparison to everyone else. I was blissed off my head!!

After the course I began teaching yoga classes in Ennis. It was a very gentle yoga based on my experiences of Satyananda yoga and Sivananda yoga. After that I got married and began a family. I continued to teach yoga in the prison. After my 5th baby was born I had built my yoga studio that I had always dreamt of having. I began teaching gentle classes and I enrolled in a 200hour Vinyasa style teacher training course in Gort. After the birth of my 5th baby my body and mind were very weak and Vinyasa yoga is not for the faint hearted. The course involved 1 weekend a month for 8 months and a week in Spain. After the 3rd weekend of the training I rang the teacher to say I didn’t think I was up to completing the training. I was exhausted after the weekends, in bed for 2 days after. I wanted to postpone until the following year but when the teacher explained the course might not be happening the year after I put my head down and stuck with it. I knew at the time it would be great to get through it but it felt like endeavouring running a marathon with a bad injury. I got there thanks to an amazing group of fellow students. It was not easy but what I learned on the course has stood me in good stead.

I now teach regular yoga classes at my studio- doolinyoga. The physical and mental benefits of regular practise are fantastic and keep me balanced and zen in my own daily life.